Hello and welcome to the third face-lift for my online portal. Before I tell you all that I have planned for the new site, let’s take a walk down memory lane.  You can click on the images of the old designs to be taken to an actual usable version of the old site. 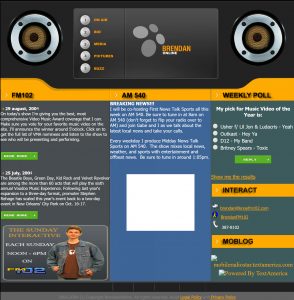 This domain started back in 2004 out of the need to document my life both for my own enjoyment but also for anyone who was interested in following me. I chose BrendanOnline because it was easy to remember and I could give it out on-air. As you can see from the graphic, the original design had announcements for my involvement with the hit music station FM102 and the News-Talk station AM540. I also posted pictures and blogged about my life all before the invention of social media.  The blog section of the site was known as “Brendan’s Buzz.”  One unique section of the website was the Moblog which allowed me to post updates to the website from my phone.  I could take a photo or write a text and it would be instantly posted to my website.  Remember, this was in 2004.

Once I left the world of radio and moved to Atlanta in 2005, I made a few tweaks mainly stripping out the announcements sections and bringing the Buzz section to the forefront. I don’t consider this a huge redesign so let’s just say this was Mk 1.5.  Again, Twitter and Facebook did not exist in 2005 so this was a fairly unique way for people to keep up with my adventures in Atlanta.  I added a section to the blog called the AudBlog where I would post audio commentary and live broadcasts from concerts.  Today that is known as Podcasting. 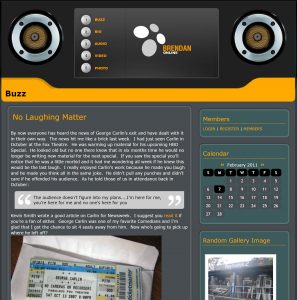 That layout served me well for a few years but in 2008 I decided that the site needed a more professional face-lift.  I really liked the color scheme and music theme so I just modernized the look.  By now blogs were fairly common but social media was in its infancy and offered little more than micro blogging and photo sharing.

Now, 15 years after its inception, BrendanOnline returns in its third incarnation.  What should you expect this go-round?  Well as you will see, the photos and audio sections remain.  There will not be a blog section because frankly who blogs anymore?  Instead I will Microblog (popularized by Twitter) and post photos of my life.  Everything will be done from BrendanOnline.com without the use of any Social Media what-so-ever.  I never needed Social Media in the past.  Heck, I practically invented Social Media on my own out of necessity.  From time to time I will post articles that go more in-depth to certain topics that I am interested in.  If you’ve ever been to BrendanOnline in the past, welcome back.  I hope that you can find inspiration through my posts.